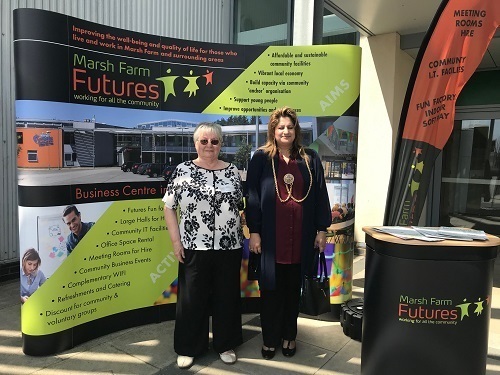 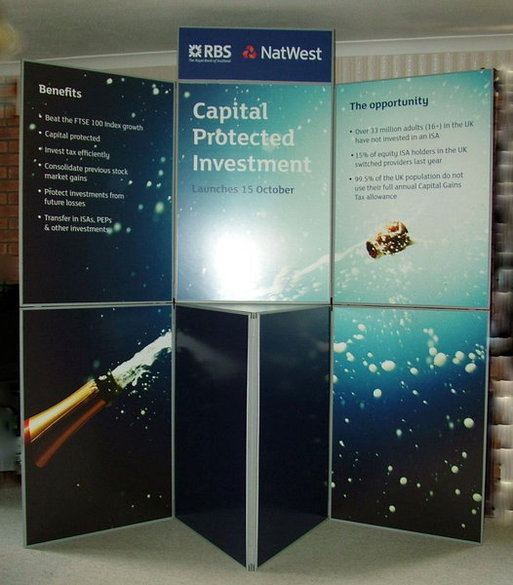 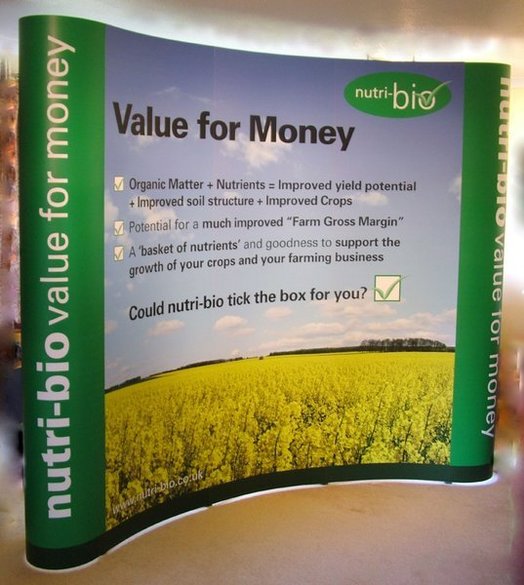 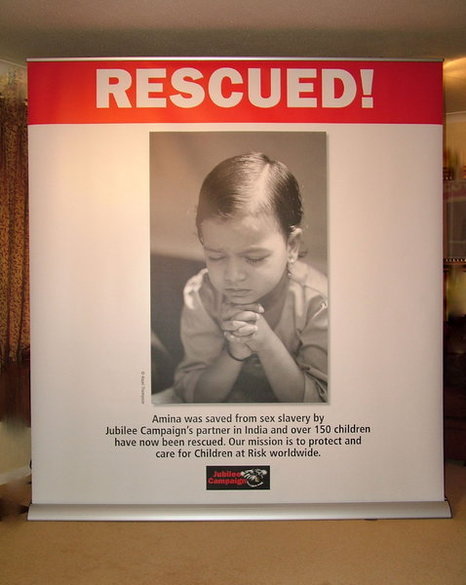 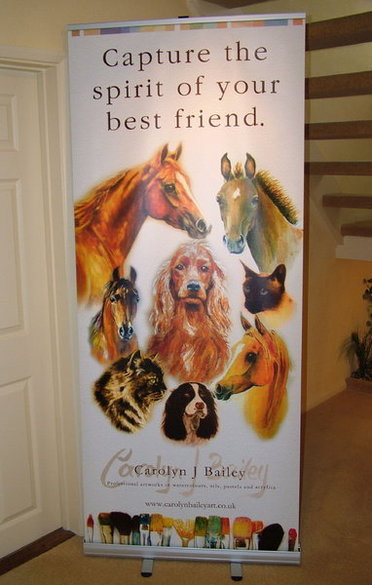 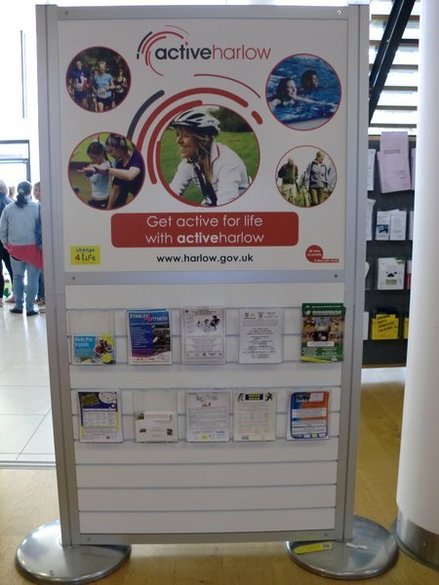 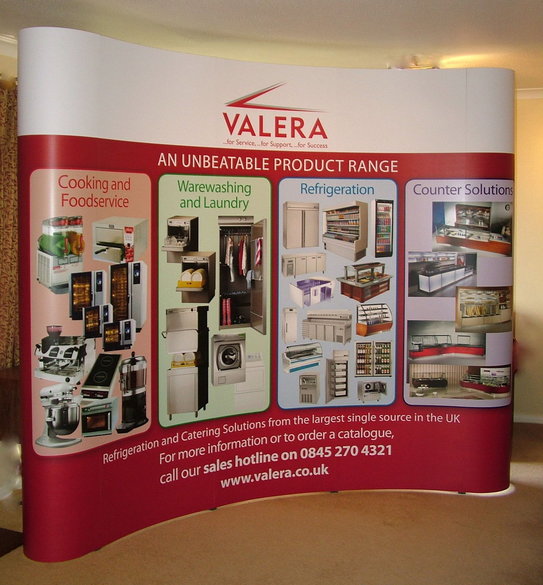 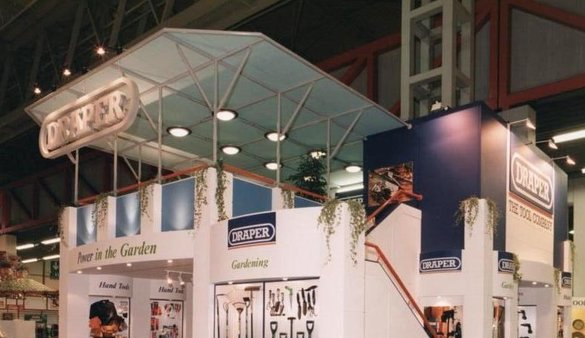 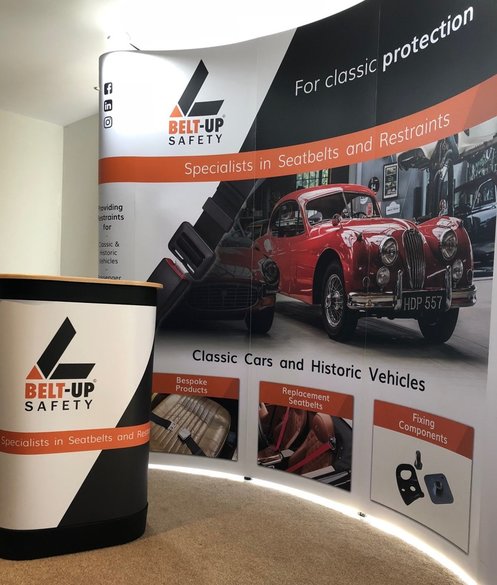 There is a very wide range of different types of Exhibition Graphics. In recent years, Large Format Digital Printing has taken over and can produce in one pass, effects that tested signwriting skills in days gone by. Often it was a combination of methods in one artwork, required to convey the visual effect and information required. But many of those skills are still used today, because they are still best to create impact and style on a 3D design project.

Polystyrene lettering was cut-out with a hot-wire cutter and stuck with glue to the walls and facias of exhibition stands to produce a very effective relief lettering - 25, 50 75 or even 100mm thick. It was economical and there were a few ways to finish the letters and logos to good effect. The polystyrene could be left white, or the faces could be pad painted with emulsion in the desired colour for corporate style. You could also spray the letters to give a solid block effect, or face the letter with gold or silver vinyl faced card to add a little bit of luxury.

It was a bulky, weightless product for signwriters to transport to an exhibition hall and you had to be careful that the letters didn't get damaged, because polystyrene is easily dented, knocked and broken. So they could only be used once and then consigned to the skip...often with the rest of the stand.

When MDF hit the market in the 1980's, signwriters started to use it on exhibition stands. It is denser and smoother than polystyrene, producing a more finished look. But it is heavier and may require a pin to keep it in position. Spray painting was necessary to get the best finish and transport was easier. 6mm thickness was popular, but like polystyrene, not good for smaller lettering. A good reolution in those cases was to have the letters die-cut from cork...a bit fiddly though.

These were very much the days when exhibition stands were popularly covered with fabrics such as felt or even suede. There was a lot of woodchip or lining paper and emulsion paint also, but the next development in lettering and logos was computer cut self-adhesive vinyl - which didn't work on the furnishing fabrics.

Vinyl lettering was a godsend for signwriters. It was computerised and meant that they didn't need to stand at a hot-wire cutter or bandsaw for hours cutting out the letters. This self-adhesive vinyl came on a roll and fed through a flatbed machine with a cutter that was computer controlled tocut the letters whilst you sat back and had a cup of tea! Far easier, but you had to weed out the letters from the vinyl sheet and stick them to a tacky transfer paper. This transfer paper you offered to the smooth surface that they were to sit upon, rubbed down and hey presto! the graphics were done. This also meant that signwriters didn't need to spend as much time on site. They could do a lot of work in the warmth of the exhibition contractors workshop fixing to prefinished panels. Even employees with limited 'art' skills could apply bits of lettering if necessary...save those occassions where the backing paper curled and stuck to itself, or the letters came of and were stuck up your arm!

Through all of this, a major part of the exhibition industry was the Photographic Studios. These guys were printing large photos to be applied to the stands - amongst other feature areas. If the transparency was good enough you could blow pictures up like large format nowadays, and they were mounted to several sheets and butted together and fixed to the wall like a billboard poster. Hardboard was a popular substrate, having one smooth surface that the print was applied to. It was then protected with a laminate seal over the face, usually in a non-reflective matt finish to reduce the glare from spotlights, or gloss if you wanted a nice shiny surface.

The photographic studios also produced photo prints for lightboxes. The crispest was a printed transparency sanwiched between a sheet of opal perspex to the rear for light diffusion, and a sheet of clear at the front to protect the print. This was superceded on cost grounds by Duratrans - a transparency sheet with a built in opal effect that could be mounted to a sheet of clear perspex and then laminated with a protective seal. Far easier to handle!

Alongside photographic printers, a lot of the information panels on stands were produced by Screenprinting. This meant that repetitive backgrounds could be produced and specific detail for that panel overlaid by another screen, or perhaps another media entirely - photos, vinyl lettering or other combinations to achieve a particular effect or result.

Computerisation of Graphic Design in the 90's started to change things. Digital Imagery and Inkjet Printing meant that a whole host of effects and styles could be achieved by computer design and Large Format Printing. This increased the options for Display Graphics and the Pop-up Stand was born, along with the Banner Stand. Everything was kept narrow and generally within the width of a substrate sheet onto which the print was mounted. That's why the Pop-up was made up with several printed drops that were matched and hung side by side to create a single print effect. Banners developed and the Roller Banner became very popular, with the print protected inside the base during transport and staorage. Gradually materials developed and with sewing sheets together and then wider printers, huge prints began to adorn exhibition stands and buildings around the world.

Printing direct onto boards, such as Foamex, has made production of Graphic Panels quicker and easier. Along with UV printing and curing, whch makes the prints more resisiliant, this does away with the mounting and sealing process.

Display Systems have encompassed these developments in printing, and now many of the systems are designed to take advantge of dye-sublimation and fabric printing. One system, used on Formulate Displays, prints front and back fabric panel which are then sewn together to form a sock. It is then pulled over a lightweight aluminium framework with a zip at the bottom to secure and tighten the graphic to great effect. Formulate Banners and Walls are available and these are easier to handle than traditional Pop-Ups and Banner Stands. The fabric print is more resilient and when stretched over the framework will smooth out most creases.

Vector Displays can also use fabric printing, but with a silicone gasket sewn into the edge of the graphic. Vector uses an aluminium framwork with an angle frame around the perimeter. This frame has a slot into which the gasket is pushed and this continues all around the frame. This secures the print in position and makes the print taught, stretching out any creases. These Vector frames can be fixed together to form a complete exhibition stand, shell scheme or display.

In addition to the printed graphics that we supply with the display equipment that we sell, we provide a full range of services for Exhibition Stand Graphics, including:

Eyeleted Banners for outdoor use

We are also experienced in design and artworking and offer these services at very reasonable rates.